The Limited Edition International Tabletop Gaming Day Box from Nerd Block and Geek & Sundry was my first of NB’s special blocks. Unfortunately it will likely be my last. 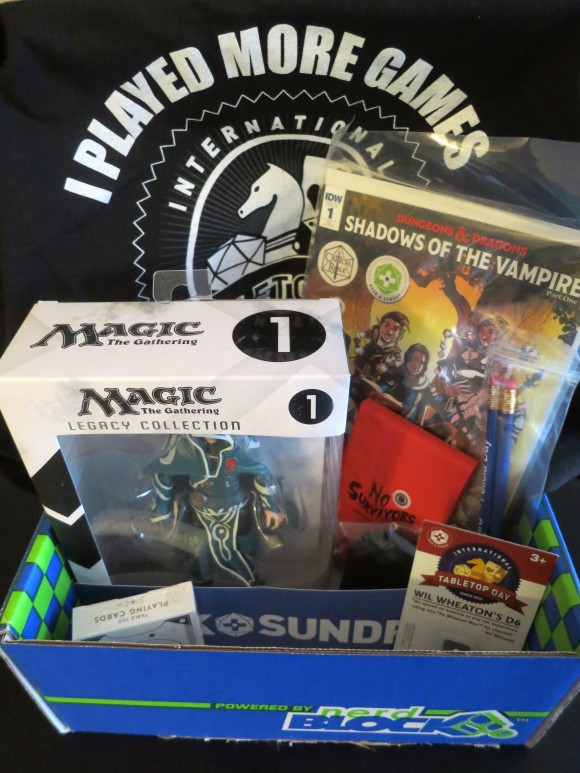 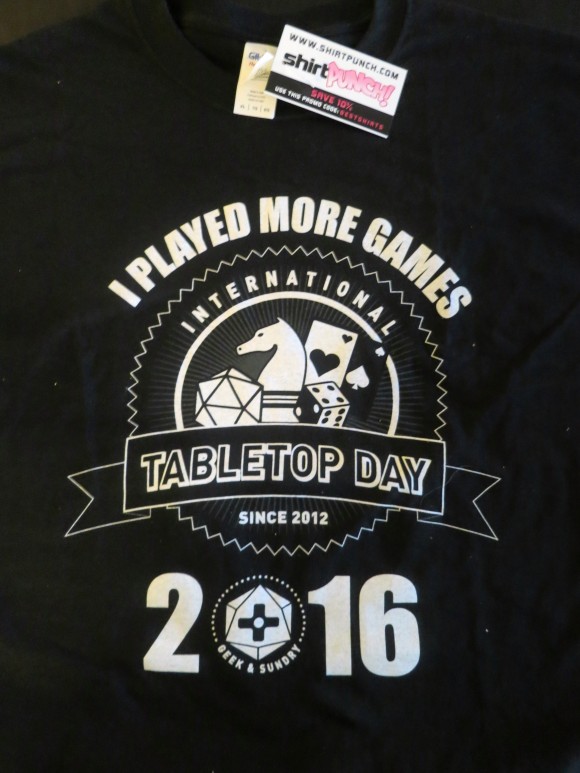 The majority of the space in the box was taken up by the Magic The Gathering Legacy Collection Figure. Look, I understand how these boxes work, and I’m not surprised to be getting overstock. But for double the price of a “normal” block I expect better than so much space and around 1/3 of the advertised “value” ($25 retail price of the promised $75+ value) of the items being a two year old figure selling for less than $10 in local game store bargain bins. Figure itself looks fine, but is nothing special. 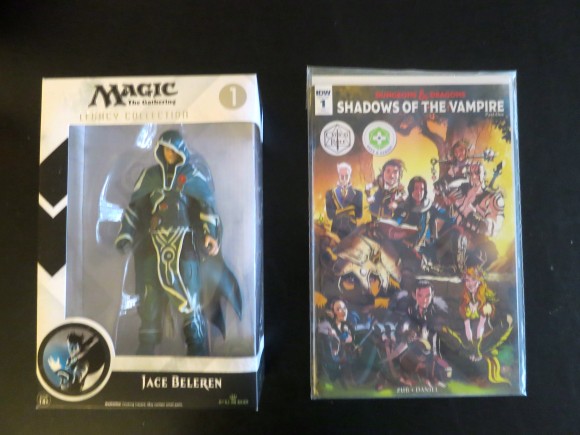 Dungeons and Dragons Shadows of the Vampire comic #1 is a reasonable inclusion, although the exclusive cover featuring the cast of one of Geek & Sundry’s shows does nothing for me (and this will be a recurring theme).

Wil Wheaton’s D6 is a somewhat amusing novelty die featuring one dot on five sides and a logo on the sixth. The No Survivors Notepad is a meh item in my mind with a logo/branding for one of Geek & Sundry’s shows. 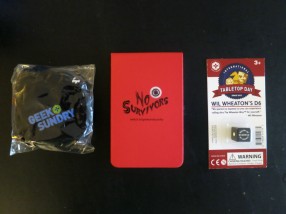 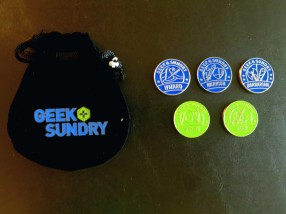 I like the Geek & Sundry Player Tokens and Velvet Pouch in general. The tokens are a nice size and have good weight. The five classes represented are decent choices and the related logos/designs are good. However this is one of many spots where the sponsor’s branding is an issue for me. Geek & Sundry is very prominent on the bag, as well as on the back of all the tokens. That’s a lot for me already, then on the face of the tokens Geek & Sundry is prominently featured across the top. Honestly I would be fine with all of this if all of the other items were on theme instead of featuring the sponsor, but that’s not the case. 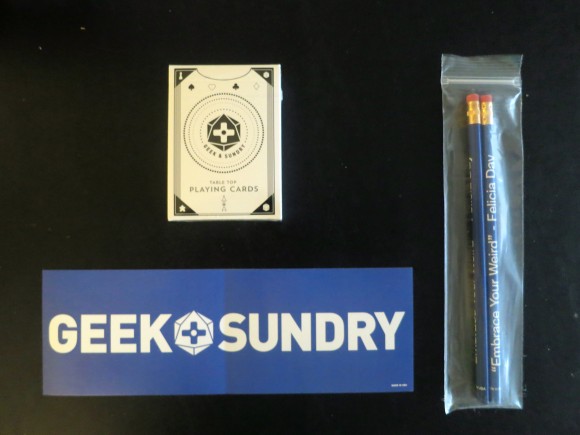 The playing cards are a logical inclusion, if a little plain. My issue is again the branding. International Tabletop Day is on one side of the outer box, but it’s Geek & Sundry plastered on the back of every card. A pair of pencils doesn’t impress me, with or without the Felicia Day quote. The last item is a Geek & Sundry bumper sticker. Sigh.

I have to say I’m disappointed with this special edition block, and won’t be getting any more. My monthly Nerd/Arcade/Sci-Fi Block items aren’t plastered with the Nerd Block logo, and for TWICE the price of a normal block I expected much more emphasis on the Tabletop Day theme and much less on the sponsor. “International Tabletop Day” or its logo was on 2 of the 9 items (3 if you want to be generous and count being on the outer box only of the deck of cards). Geek & Sundry logos were on 7 of 9 items, ridiculously so on 3 of them.

I’m sorry if it seems like I’m harping, but again for the additional cost I feel like if anything was repeatedly featured on the included items it should have been the advertised theme. Instead I feel like I payed for a Geek & Sundry advertising kit. If this was advertised as a “Geek & Sundry” block rather than an “International Tabletop Day” block BY Geek & Sundry and Nerd Block I never would have bought it in the first place.

I’m searching around for this box complete if you still have it sitting around and willing to part with it. Let me know! Thanks!