I’m a lifelong fan of Batman and the mythos surrounding him in various incarnations. I also have enjoyed previous episodic adventure games from Telltale such as The Wolf Among Us and Life is Strange.  As such I’ve been quite excited to check out Telltale’s foray into Gotham City and their exploration of its iconic hero. 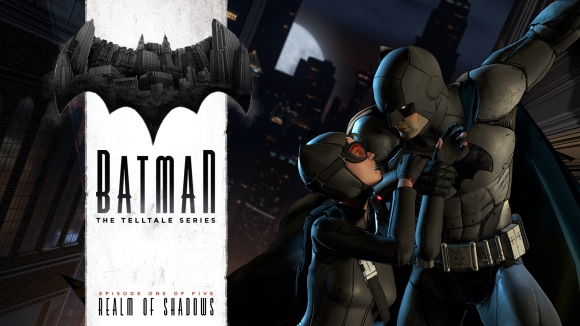 Adventure games of this type are primarily about the story, and Telltale had the proper insight to realize any strong Batman story is at least as much about Bruce Wayne as it is his alter ego. The core plot arises from the Wayne persona, while Batman provides the action. The balance is quite good so far. The themes and certain events are quite dark, but of course a serious take on Batman lends itself to such treatment.

This is set early on in Batman’s career, and the worldbuilding and introduction of their version of familiar characters is well handled. There are several nice cameos and Easter eggs, and the combination of characters used at this point is excellent. I really like one reimagining of classic villain in particular, and there’s a great twist involving another.

The actions sequences seemed a bit different from what I’m used to from Telltale, as the commands I missed didn’t seem to impact the scene at all. Batman still appeared to dodge in the indicated direction even if I missed the input. I could be wrong, or the inputs in this game might just determine a failure of scene if enough are failed. Can’t say at this point.

The conversation parts were the expected solid stuff from Telltale. The choices have small effects so far, but they are there and appreciated. The staying silent option continues to add nice layer to conversation choices. It’s simple but important.

A third part of this game involves investigation of a crime scene. These aspects are interesting and have a lot of potential.

Overall I found this to be a strong start to what will hopefully be a captivating ride. There’s a nice mystery at the center and this episode ended with a big hook for future episodes.

The environment is fantastic. It captures the feel of the locales perfectly, including a boarding school, associated dorms, a run down house, etc. I found myself stopping to look at all the posters and flyers as much out of curiosity as to find clues. There’s a significant amount of little things to poke around.

Some players will find it on the short side, but it had good progression and found a decent stopping point, and is after all just episode 1. I enjoyed this and will definitely be checking out further chapters.

[…] of Arkham jumps right in to deal with the bombshell unleashed at the end of (episode 1 – see my review of that for general gameplay information). It’s an unexpected direction for a Batman story, and the […]

[…] As with all Telltale episodic games Batman focuses on a building story throughout the “season.” Start of course with episode 1. […]

[…] games Batman focuses on a building story throughout the “season.” Start of course with episode 1. Also see my reviews for episodes 2 and […]