As with all Telltale episodic games Batman focuses on a building story throughout the “season.” Start of course with episode 1. 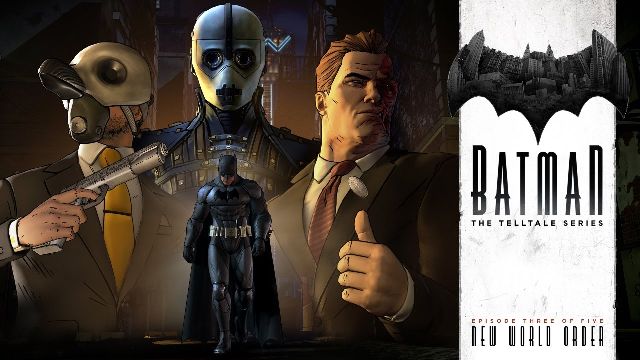 The significant choices from previous episodes are reflected in the opening story summary and the first new scene heavily depends on the major choice made in Children of Arkham. In general this series seems to have the most significant and meaningful choices of all telltale games I’ve played, but I won’t know for certain until/unless I play through again changing some things. A lot of them (and a lot of the dialog choices) seem to have “right” answers though, as Bruce’s responses and actions can generally be kind or bitter.

The plot proceeds with interesting parallel developments and threats on multiple fronts. Some of things are a bit heavy handed, but they fit the growing narrative all the same. Like the previous two episodes New World Order has a good balance of investigating aspects, story, and action.

Pretty big surprise to end here, providing a pretty good payoff to one of the main mysteries. I can imagine a fair amount of backlash, but it fit with the story they’ve been telling and raises interesting possibilities for the rest of season 1. Halfway through and this remains a compelling play, albeit with a plot and some characters majorly at odds with normal Batman canon which may bother some people. It still feels like a Batman story though, and it’s a good one so far, which is what matters most to me.

One thought on “Batman: The Telltale Series Episode 3 Review”