The signing of Stardom’s Kairi Hojo in early 2017 by the WWE created immediate buzz and excitement. It was wonderful to see that feeling build in anticipation as the Mae Young Classic and her debut as Kairi Sane approached.

Kairi is a masterful ring technician, measuring everything she does carefully and exerting expert body control for maximum visual impact. Her trademark diving elbow from the tope rope looks as beautiful as it does devastating. Her excellent selling draws the audience in and invests them emotionally in her matches, yet she always believably feels like a threat to her opponent no matter how much punishment she’s taken or how much bigger her opponent is. She brings something special and unique to WWE, and the hype surrounding her debut as it approached showed they realized it.

My own perspective on Kairi’s pre-WWE career was bit different from when I wrote about Kana (NXT Step for a Legend) and Johnny Gargano (NXT Step for an Icon) heading to NXT, as I’d only seen her live on two occasions (though she essentially wrestled twice on each show). Even from that small sample it was easy to see the command she has of her craft.

My first time seeing Kairi live was under unique circumstances, as she was involved in Act Yasukawa’s retirement match at Climax 2015.

Act’s retirement match and ceremony had an incredible atmosphere around it, and the entire spectacle was awesome to be at live. Kairi teamed with Act & Haruka Kato vs. Holidead, Kris Wolf & Kyoko Kimura in a match that went on for about 10 minutes, with back and forth action that saw Act and her teammates, particularly Kairi, more and more at odds. Both Act and Kairi did a phenomenal job at portraying two people who thought they had reconciled but were just never meant to get along. Things eventually exploded and the two fought into the crowd with everyone else along for the ride, resulting in a double countout.

Then the “real” match began, as Act rejoined her former Oedo Tai stablemates leading to Act Yasukawa & Kyoko Kimura vs Haruka Kato & Kairi Hojo. This was a fitting send off, with Act and her teammates clearly enjoying themselves against long time rivals. Kairi was clearly genuinely emotional as she helped bid farewell to her fellow wrestler’s career.

The following year I was back for Climax 2016 and saw Kairi in a pair of equally impressive matches at opposite ends of the spectrum. In a special contest model Nana Suzuki made her debut in a singles match against Hojo, one of Stardom’s aces. Nana actually played her role as an overmatched but determined underdog well and the match was quite good, due in no small part to Kairi playing her own role of dominant veteran absolutely perfectly. She knew exactly how to rightly control most of the offense and avoid reducing her own standing yet still make her rookie opponent look strong. That takes an incredible amount of skill and a deft touch, and the two told a great story here. 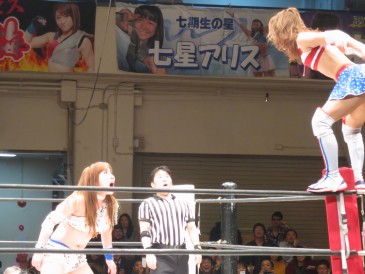 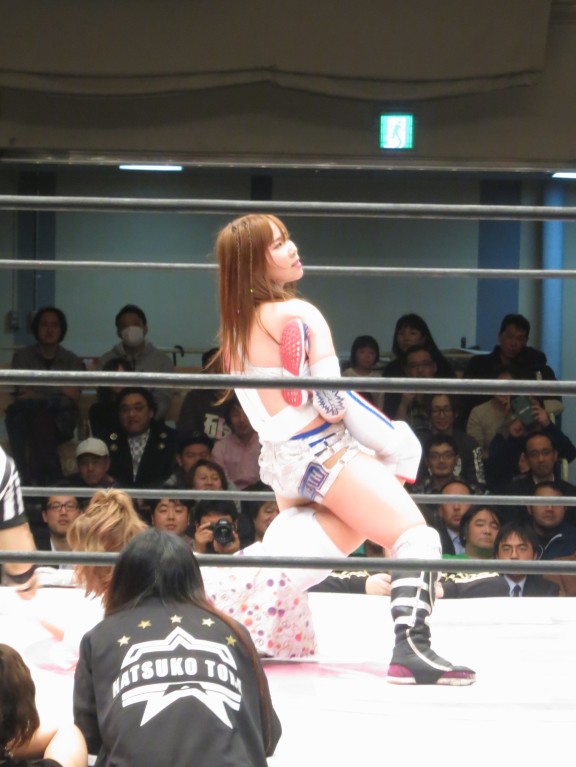 Later that night Kairi told a completely different story as she and partner Yoko Bito looked to regain their Goddesses of Stardom Titles from Oedo Tai (Kyoko Kimura & Kagetsu). This time Kairi was in some sense the underdog, as there was a lot of interference from the Oedo Tai entourage outside the ring. The stacked odds and again excellent awareness of the story being told combined to generate quite the conquering hero reception for Hojo & Bito when they finally overcame it all and took their belts back. It was a treat not only seeing Kairi perform twice, but in such different (but complimentary and consistent) circumstances. 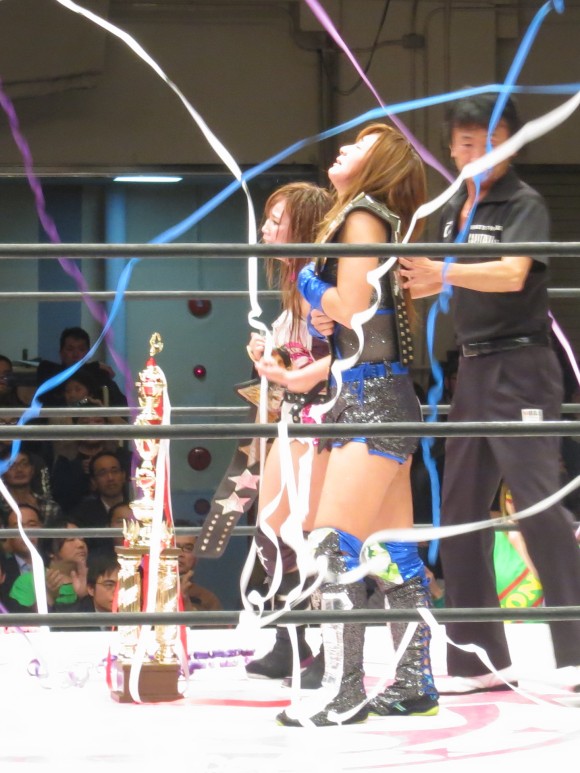 Fast forward back to a few months ago and Kairi entered a WWE ring for the first time as part of the Mae Young Classic. It was certainly no surprise when she provided several of the best matches of the whole thing, including a show-stealing first round encounter with Tessa Blanchard, great bouts with Bianca Belair, Dakota Kai, and Toni Storm, and a fitting finale to the whole thing against Shayna Baszler. Seeing her joy at becoming the well deserved first ever MYC winner was wonderful. Since then she has become an integral part of NXT’s women’s division, and is likely to feud with Shayna Baszler and eventually progress to a one on one challenge to champion Ember Moon.

Kairi Sane is the epitome of the cliche “a joy to watch,” and I wish her all the best as this exciting new phase of her career continues.

3 replies on “The NXT Step for a Pirate”

Wow, I like what Rob Schamberger is doing! This is probably one of my favourites.

I haven’t heard of Kairi Sane before she got signed to NXT and also haven’t watched the Mae Young tournament. (There’s too much Wrestling, I don’t find the time for everything 😀 )

Her flying elbow is amazing, but I am a bit ‘meh’ about her still. This is probably just because I haven’t seen a lot of her yet, and so far she is just the smiling Pirate lady. I am looking forward to seeing more though!

There are some great women in NXT right now. I do hope that they don’t put the title on her yet though. I want to see Nikki Cross or one of the Iconic Duo to get it first haha

When you get a chance her MYC matches (in episodes 4, 5, 7, 8, and the finale) will give at least a general idea of what she can do.

Totally, with more on the way. Would like to see a Cross title run too, but she’s likely to be called up with Sanity before that happens.