I was lucky enough to see four shows themed about and/or on Christmas this year. First was an Ice Ribbon dojo show on the 23rd leading to a show of theirs at KFC Hall early on Christmas Eve. After that was Gatoh Move in Ichigaya, and here I’ll be talking about my Christmas Day show at Shin-Kiba First Ring by Marvelous.

Similar to last year this show had a lot of Christmas elements, in this case including some wrestlers in costumes and randomly inserted presents under certain chairs in the venue (such as towels, t-shirts, etc).

There was a heavy focus on teams and stables for this show, with matches often having leadership implications and or teammates facing off. For example in the opener of HENA-CENTRIC (Sakura Hirota & Miki Tanaka) vs Level 5 (Yuu Yamagata & Tomoko Watanabe) it seemed whoever obtained the pin would become the leader of their team, while whoever WASN’T pinned on the opposing team would gain that honor for theirs.

As to be expected with Hirota involved, this was almost all comedy, starting with her generally being as much on other team’s side as her own, and proceeding into things like Watanabe giving her a gift of  diapers for her twins which eventually were fought over and placed over Hirota and Tanaka’s heads. There are parts of Hirota’s humor I don’t care for, but a lot of it here was amusing and I enjoyed the match overall. The absolute highlight of the comedy involved something I usually don’t enjoy: “fourth wall” breaking. Hirota was trapped in a waistlock screaming and struggling to avoid a German suplex when she suddeny stopped and just stared at her partner in the corner for a second. She then apologized to Wantanabe, asked for a moment, calmly opened the latter arms and left her standing in that position. Hirota then walked over to her own corner, slapped Tanaka upside the head for still having the diaper on (a good five minutes after it was put on her), and ripped it off her head. Hirota then went back to Wantanabe, thanked her, and put herself back in the waistlock, complete with resumed screaming. It was absurd, and hilarious. 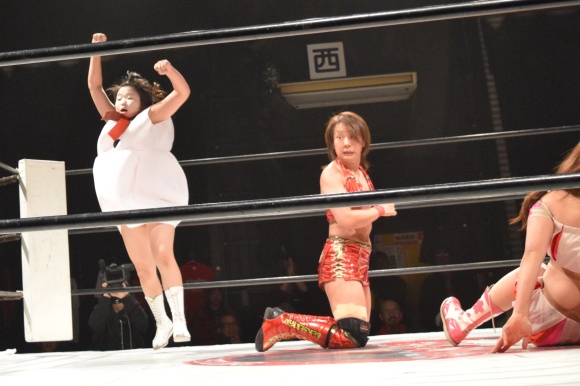 This was my first time seeing Tanaka, and she was a highlight here. She was decent in the action that happened and great in her role in the comedy, and her truculence at listening to Hirota and dealing with her was perfect, particularly given what it built to. Eventually Hirota and the other team all got in each other’s way, and the rookie no one was paying attention to or cared about jumps on the pile and gets the win on Wantanabe.

Everyone else as stunned and Tanaka’s gleeful jumping around in celebration was AWESOME (amusingly STILL in her snowman costume, even though Hirota had shed her Christmas tree one early on). She immediately lets her newfound power go to her head, bossing Hirota around, making her hold the ropes for Miki, etc. Can’t say it wasn’t deserved. 😉

One last phenomenal touch was Yamagata’s slow realization that things worked out for her. She showed disappointment at the loss, which gradually changed to a look of relief and then glee as she processed that she wasn’t pinned and thus was her team’s new leader. She treats Wantanabe much the same as Tanaka did Hirota as they leave.

The action was fine and the comedy was a mix of hilarious and meh, but the finish and story were fantastic. 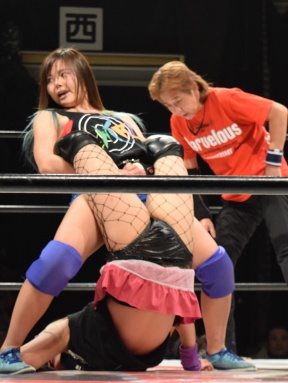 While I didn’t understand what was on the line nor the full dynamics of the match pitting Rin Kadokura against Sumire Natsu, the general gist of Rin not having any patience for Sumire and Rin’s Wave Tag Team Championship partner Takumi Iroha somehow being in the middle of things was easy to pick up. Little things like Sumire mimicking Rin’s entrance dance behind her to Rin’s eventual displeasure and Iroha aiding Rin at points seemed like nice touches to the unfolding angle.

Sumire has improved over the last couple of years but is still just ok in the ring and more character than ringwork. The crowd didn’t seem to care much, which minimized that second point and held things back a little in general. On the other hand Rin is great (particularly for her experience level) and was able to fire everyone up when she took over offense, so this evened out to be fine overall.

To Rin’s frustration they wrestled to a time limit draw, and it was established that the victor would be determined by Rock-Paper-Scissors. They proceeded to draw several times, until Sumire demurred and seemed to grant Rin whatever they were fighting over with a self satisfied look and an expression of confusion from her opponent. Obviously there’s more to this than what I caught, but the high points of the story still seemed well conveyed even with my lack of Japanese language comprehension. 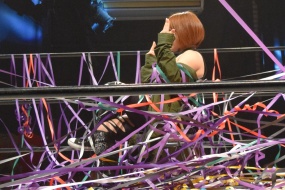 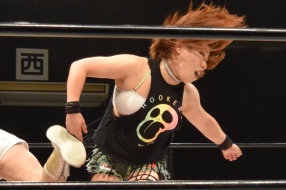 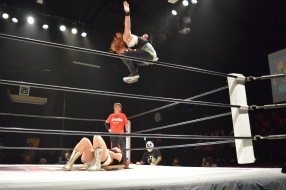 The third match saw faction W-Fix fight amongst themselves to determine a leader as DASH Chisako & KAORU faced Chikayo Nagashima & Megumi Yabushita. The referee immediately explained given the tendencies of the people involved she wasn’t going to bother with silly things like rules and this became no DQ.

I’m a huge fan of Dash in general so it’s always a treat to see her, and the remainder of the participants are other veterans capable of magic on the right night. This was certainly it. The match was incredible, with the teammates going all out in a war using all of their trademark heel antics on each other and just flat out trying to win, which had the crowd giving them all big face reactions if just for one night. It totally worked in a way that will let them go right back to being booed as needed on the next show. And any match that ends with Dash’s picture perfect frog splash (the “Hormone Splash”) is even better. 🙂 My match of the night, and one of my favorites of the whole trip.

The pinfall gives Dash leadership of W-Fix, but she immediately cedes it to her partner Kaoru. Karou then presents the team with matching jackets as Christmas presents. In gratitude they swarm her with a group hug declaring “Best Leader!” This whole sequence amused me to no end.

The tag team of Mio Momono and Maruko has expanded into a full faction called the “Outsiders,” and here each teamed with other members in another intra-faction Leadership match, Mio Momono & La Rosa Negra vs Maruko Nagasaki & Kyuri.

I’ve written about Mio and Kyuri as rising stars, and they’ve both become personal favorites of mine. Maruko is also right there with them as a phenomenal quasi-rookie talent. All three are much more skilled than their experience would suggest, and I was really excited for the opportunity to see them square off in various combinations. They delivered, as did the four competitor. Rosa did interject a lot of comedy into things here (mostly based around struggling with Japanese and not quite understanding things), but it worked well and her ring style was a good fit as well. I came out of this really excited about her being a part of this unit and seeing her in more matches alongside the others. Great stuff.

The match ended in the second draw of the evening, and after an extended sequence of getting Rosa to do RPS correctly, everyone throws the same thing… except Kyuri, who becomes the Outsiders’ leader. Hopeful (and force of nature) Mio is NOT pleased, and Kyuri herself seems reluctant. The other three actually pose without their leader, but then decide “maybe okay” and seem to agree to give her a chance. Lots of interesting ways to go with this.

The semi-main event was a men’s match pitting Leo Isaka against TAKU Iwasa. I don’t know if it was nerves or just being green, (at less than a year wrestling) but Leo was a bit off in the early going. Not horrible, but clearly not hitting things cleanly and being a bit off at times. The crowd was much more into him as the home grown talent than his visiting veteran opponent, which was understandable but hurt reactions a bit because the crowd didn’t care when Taku was on offense but because of the differing skill levels the match was actually much better whenever he was. Things did ramp up overall as the match went on though, and as mentioned the crowd was excited for Leo even in defeat.

Takumi Iroha, who I’ve also  wrote about as someone to watch in the past, also main evented last year’s Marvelous show and is clearly being groomed / built as the central star of the promotion. Here she got a one on one non-title opportunity with Sendai Girls’ Champion Chihiro Hashimoto. 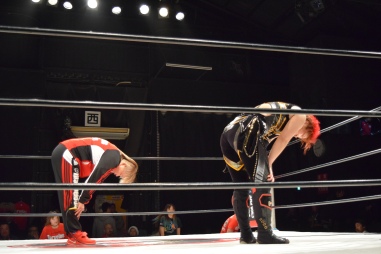 This was my first look at Chihiro, and I was definitely impressed. It’s immediately easy to see why she holds Sendai’s title. This was an excellent, hard hitting contest with Takumi and Chihiro just beating the hell out of each other and throwing each other around. Iroha’s blend of power and high flying is just incredible.

They battled all the way to the third time limit draw of the evening, which wasn’t terribly surprising given the participants. I know there might be some criticism about half the matches ending that way (one I’d normally share), but each match it happened in unfolded differently, and logically, with varying post match implications and significance. So I was actually totally fine with it all myself.

Strong overall show from Marvelous, probably the best I’ve seen from them yet. Even the stuff that wasn’t quite to my tastes wasn’t bad, and the highlights were fantastic. This one’s an easy recommendation.

I know this stuff is staged, but even still, I found myself grimacing in sympathetic pain at some of those photos!

Oh, me too. And there is a definitely a work ethic (particularly in Japanese wrestling companies) that the most important thing is it looking good, so while they are making sure they don’t injure anyone and “pulling” their strikes when they can, a lot of times they certainly are hitting each other.

Well, there goes any chance of me having a career in this 😉

[…] Rina Yamashita. Kaoru’s at her best in hardcore matches, and similar to the W-Fix match at Marvelous’ Christmas show she was completely in her element here. Avid Rival (Mizunami & Misaki Ohata) is my favorite […]