I can’t believe it’s so close to the holidays, and that it’s already time for me to be back in Tokyo. My first show for this trip was Christmas Ribbon at the Ice Ribbon Dojo.

This wasn’t a Shutter Ribbon event, so I don’t have any pictures of the matches.

Right before the show got going Sato and Tsukka came out in suits with a formal announcement that a settlement had been reached and that Tsukushi will be returning to Ice Ribbon at Ribbonmania in a “career reset.” Tsukushi then came out for a few words. Her time away and working in the background was appropriate, but I’m glad things are going better and an arrangement was reached for her second chance. She’ll be facing Tsukka in her re-debut.

The start of the show was then announced and the roster came out in Christmas outfits (to Maya singing a version of “Jingle Bells”) and had a lengthy, light hearted segment of opening comments.

Maika Ozaki vs Nagasaki Maruko  was a great opener, with good, hard hitting action (man did they lay in those forearm shots) with an underlying sense of tension, and a real sense both were growingly frustrated with being unable to win. Maika has really evolved a lot since she first started wrestling in Ice Ribbon and I think both these wrestlers will have big things ahead of them. There was a brief pull apart brawl afterwards as neither was satisfied with the time limit draw, so a rematch seems likely. Looking forward to it.

The teams of Tsukasa Fujimoto, Miyako Matsumoto, & Karen DATE and Kyuri, & Novel Tornado (Satsuki Totoro & Nao DATE) each brought several balloons to ringside with them for their 6-woman tag match. It indicated another of IR’s special stipulation matches that highlight touches of comedy and amusingly absurd match conditions while still maintaining a strong sense of competition and the essential trappings of a wrestling match. IR is one of the best promotions there is at achieving that balance. In this case the balloons were legal to use during the match, and there were numerous clever spots involving popping the balloons on and around their opponents. From various splashes onto each other with balloons wedged in between people to hard kicks popping balloons on opponents’ chests and faces, etc there was so much amusement the fact that the competitors often had to hold balloons in place on themselves was easily overlooked. Another humorous highlight was “Merry Christmas Mama Mia,” in which Miyako laid out her three opponents in a line and had her partners Tsukka and Karen follow her around the ring posing while Miyako sang “we wish you a Merry Christmas.” Of course the entire opposing team got their legs up when Miyako’s trio went for the splashes at the end.

This was my first time seeing Novel Tornado team in any capacity, and they have great chemistry and nice double teams. Kyuri fit in well with them and the opposing trio was an equally suitable pairing. Again what I liked best is that underneath all the comedic elements was a solid, well wrestled match. And of course seeing Miyako get a rare win with a Super Mama Mia (onto a balloon of course) was a nice bonus. This was a ton of fun.

Things went back to all business in the third match, an interesting non-title encounter between Ir’s Cross Infinity Champion Risa Sera and Uno Matsuya. Uno continues to be absolutely incredible at playing the underdog and getting the audience behind her, and with a little bit of dismissiveness thrown in from Risa they had the crowd fully invested and totally believing in a possible upset by Uno. Risa had a few close calls and eventually had to pull out several finishers to put the upstart down in another great contest.

The timing of this was intriguing, as Uno is still a part of the Young Ice Tournament. She was despondent with the loss, and while I don’t think this is how the tourney will play out her winning it and using the prize choice of championship opportunity to demand a rematch from Risa with the title on the line is certainly one logical way they could go and would be a highly satisfying story to watch unfold. 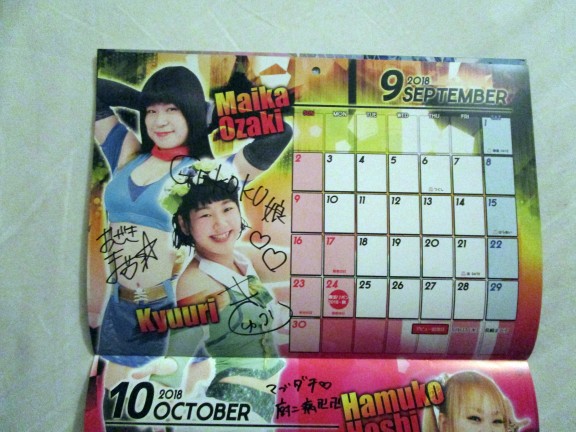 The main event saw a nice combination of build for two different matches at the next big show as Maya Yukihi & Ibuki Hoshi faced Akane Fujita & Asahi. The very next day Akane and partner Kurumi would be challenging Azure Revolution (Maya & Risa) for the International Ribbon Tag Team Championships, and Asahi and Ibuki would be facing off in a singles rematch. Akane started things off passive aggressively by shaking Ibuki’s hand but refusing Maya and from there all four kept up a good feeling of hostility and wanting to better their respective rivals here. This was best when the wrestlers were just trying to plow through one another and viciously striking their opponents. The sound of the impacts the smaller Asahi and Ibuki were managing when forearming each other was cringe inducing, and Akane playing wrecking ball is always a treat to watch.

There was some awkwardness during other sequences, such as Maya seemingly not being able to decide which corner to go up in at one point and repeatedly starting to go out just to come back in and think some more (given the sequence eventually ended with her partner getting involved I’d guess either someone was out of position or Maya momentarily lost track of where things were going and whether her choice of corner mattered). But they were minor things overall and the match was still quite a good main event to finish the show off  that provided some great build for the following day’s show. Maya eventually got Asahi isolated and kept hitting escalating moves until the rookie couldn’t kick out.

The post show roundtable was all about building up the next show, with a nice summary video package shown and several little scuffles and/or arguments between impending opponents. Asahi seemed quite broken up and was crying as she gave her portion, and Tsukka picked her to lead the show ending “Happy Ice Ribbon” cheer to the audience’s strong approval. Two new trainees were introduced as well.

I really enjoyed this. It had a diverse batch of matches and styles and was just generally good wrestling all around. The recent influx of talent is certainly having an effect, as having more power wrestlers such as Totoro, Nao, and Maika in addition to Akane and Kurumi and the MMA influence the Team Date women brought in to supplement mat technicians like Kyuri and Tsukka adds significant depth and variability to the stories that can be told. This show was a perfect way to start my trip.

[…] was my second of four Christmas shows this year, taking place on Christmas Eve. The first was an Ice Ribbon dojo show the day before, which did a lot to build up some of the issues going into this […]

[…] was lucky enough to see four shows themed about and/or on Christmas this year. First was an Ice Ribbon dojo show on the 23rd leading to a show of theirs at KFC Hall early on Christmas Eve. After that […]

[…] in featured the re-debut of Tsukushi to in-ring action after her hiatus.  As announced at the dojo show on 12/23 this was to be a career reset for her, underscored by the fact that this was the opener and […]