Last Spring Ice Ribbon’s Tequila Saya started producing a series of biweekly shows called P’s Party (“short” for Peace Party… somehow…) initially focusing on talent with less than three years experience (although as time passes some of their core roster are obviously passing that particular hallmark), with some vets mixed in for them to work with. The concept is fantastic and I’ve really enjoyed the shows of theirs I’ve seen.

This was a part of Golden Week’s Yokohama Wrestling Festival, and a big deal for P’s Party as it was their first bigger, non-Ice Ribbon dojo show.

The show opened with a 5-way elimination match featuring five of the six young wrestlers being spotlighted throughout the festival in matches against each other (one representative from each of the festival’s participating companies). Ibuki Hoshi vs Amazon vs Giulia vs Himeka Arita vs Shoki Kitamura was a short, fun match that made cool use of the over the top elimination elements. Ibuki and Shoki formed a bit of an alliance leading to the eliminated Shoki saving Ibuki from hitting the floor late in the match, then Ibuki edged out Giulia to pick up the victory. 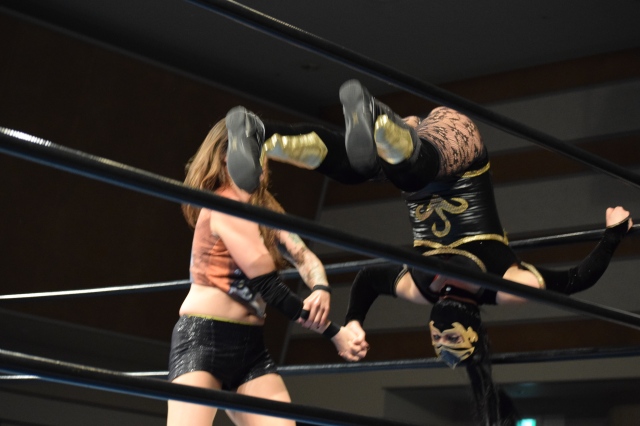 Next Mystique defeated Chabela in another five minute encounter that honestly wasn’t much of anything until a spark of life towards the end (even despite getting a chair involved outside mid-match). They tried and it’s always good to finish strong, but I’d like to think both have better performances in them.

It’s always a treat to see Marvelous’ rookies, as all three (including the later to appear Maria) have really great instincts and are developing into compelling, well rounded wrestlers extremely quickly. Here Mei Hoshizuki & Mikoto Shindo put on a strong showing before eventually being overwhelmed by the size and power of their opponents and defeated by Satsuki Totoro & Aoki Itsuki. 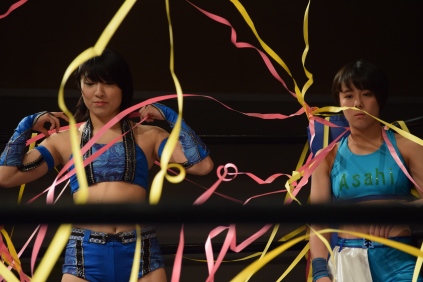 The ongoing rivalry between Asahi and Suzu Suzuki continued here as they faced off in a tag encounter with partners Rina Shingaki and Miyuki Takase respectively. Solid match all around here. Rina’s really been evolving over her time with P’s Party, which is great to see. Miyuki looks more and more like a superstar every time I see her. She weathered Asahi and Rina’s determination, slowly wore them down with help from her partner Suzu, and eventually picked up the win for her team.

Which also continues to have Suzu dominate her rivalry with Asahi. Personally I can’t wait until Asahi finally defeats her, and the way things have gone if Ice Ribbon does it correctly the moment will be something special. 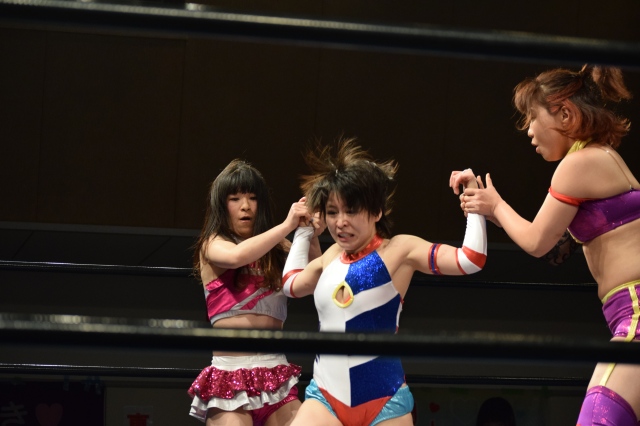 A day after her debut match, during which she lost the Triangle Ribbon Title she unexpectedly won as a referee at Ribbonmania, Banny Oikawa was in another 3-way as she faced Uno Matsuya and Tsukushi. Had she retained this was to be another title match. Decent, with the right person going over as Uno was being built up for Triangle Ribbon Championship contention. Awesome to see Banny get the opportunity to transition into a place on the active roster, and while they kept things basic for her she looked decent in her second match.

As great as all of Marvelous’ current crop of rookies are, Maria is my favorite. So I was extremely excited to see her get a singles spotlight in the semi-main of this show, particularly against another favorite in Maika Ozaki. This was all about the scrappy Maria showing no hesitation in facing Maika’s incredible power, and it completely clicked. They presented a good, well worked story in an exciting match that was exactly as long as it needed to be. Loved this. 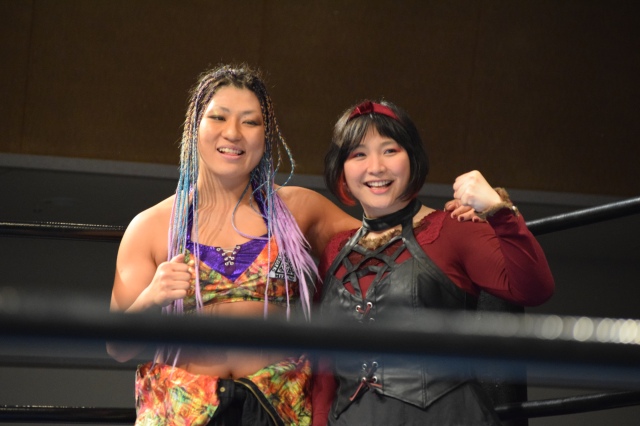 The main event featured the debut of Ice Ribbon’s newest roster member Yappy, as she teamed with regular guest Rina Yamashita with a tall task ahead of them in the form of Burning Raw (Giulia & P’s Party Producer Tequila Saya).

I was at Yappy’s first match in front of an audience as a trainee last spring and it was really awesome to see her progress to an official debut and be able to attend. 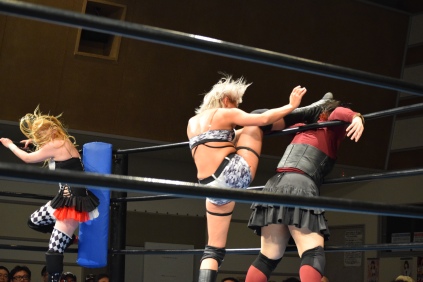 Yappy presents a contagious exuberance, and it’s pretty much impossible not to have fun right along with her as she wrestles. She looked good, showing some unique offense and … well, being convincingly empathetic while getting beat down by Burning Raw. ^_^; Rina’s a lovable bulldozer in the ring and I’m really happy to see her wrestling at Ice Ribbon more often recently. Finally, Burning Raw is developing incredible chemistry and is one of the top teams in Joshi to keep an eye on.

Words I find that constantly come to mind when I think/write about P’s Party are “solid” and “fun.” And I think that’s exactly the target spot for a promotion centered on developing younger talent (and most others for that matter, to be honest). This was a big win as their first big show, both in terms of enjoyment as well as transitioning to a different / larger environment while still retaining the atmosphere/approach that defines the promotion. Congrats and kudos to Saya and all others involved.

One thought on “Ain’t No Party Like a Yokohama Party: P’s Party 5/2/19 Live Thoughts”