I’ve seen Sendai Girls’ shows a handful of times in Tokyo and their stars here and there in other promotions (including Dash’s debut for Shimmer a month before) and am a big fan, so am always wishing for more opportunities to catch their shows. This was the first time I was lucky enough to be able to go out to Sendai and seen them in their home base, and my first show of this trip to boot. Great way to start.

Mikoto is from Marvelous and one of a trio of rookies there that have been making a strong impression as they wrestle for a variety of different companies gaining experience.

Hiroyo against rookies is always fun in general, as she knows how to rightfully dominate the match overall without making her opponent look weak. Mikoto showed good fire and determination before being put away by the veteran. Good opener.

Hirota and Karou on opposite sides of the ring means ridiculousness abound, and this was no exception. Entirely built around Hirota’s antics, specifically trying to get Shida to participate in posing, etc. Things never quite went as she wanted, and not being on the same page as partner Lee by the end caused Hirota to be rolled up and pinned by Karou. Amusing for what it was.

This is the match that prompted me to go out to Sendai. Arguably wrestling’s biggest rising star against my personal favorite. Sareee challenged Sendai’s Champion in an incredible match at their 1/6/19 show in Tokyo, and while she came up just short there she defeated Meiko Satomura herself shortly before this match and seemed on course for another shot. Dash is another top veteran in Sendai Girls and was in position to play spoiler to those plans here.

This was everything I hoped for, and Sareee picked up another big singles victory on her way to another date with destiny against Chihiro in an awesome match. Sareee is on absolute FIRE lately, combining incredible in-ring work with real star presence, and it’s always something to behold when Dash gets the opportunity to go all out. They hit the hell out of each other here while build a logical, escalating flow to the match. Fantastic.

This was surprisingly awkward early on, as Mika and Yuu was a styles clash and they took a while to get on the same page. To be honest they both need to work on their improvisation, as when things went a little off they didn’t cover very well and ended up drawing more attention to what should have been small, barely noticeable mistakes. 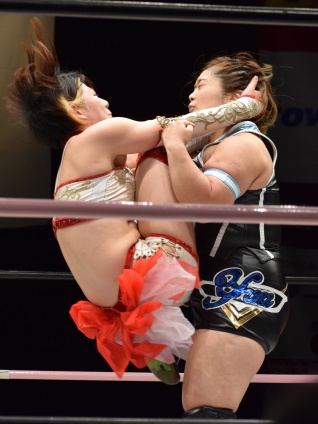 Interestingly, tagging the match’s least experienced wrestler in is what smoothed things out, as Minami is a Sendai trainee and as such has a lot of familiarity and comfort wrestling Iwata & Chihiro. Minami trying to put up a fight against more her experienced compatriots made a great anchoring story for the match.

And it was all on point from there on.  Chihiro vs Yuu was just a splendid spectacle of them trying to shoulder tackle each other into oblivion, and the next go around for Iwata and Yuu they concentrated on strikes and found a rhythm to great effect. This became really good after the awkward start. Really awesome to see Minami getting this kind of opportunity too. The champs eventually pinned Minami to win this non-title affair. 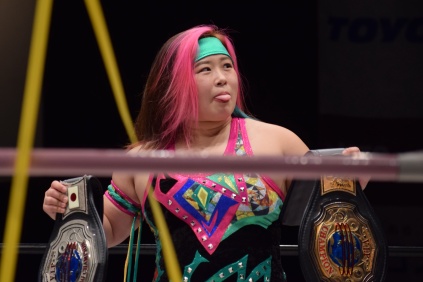 It’s impressive the level of show Sendai Girls was able to put on overall even with their legend missing (Meiko was absent from the show due to traveling to Europe), and a treat to see them out in their home area. Would love to go out there again.